The laser source is only part of your laser solution. You will likely need optics of various kinds to control the energy produced by the laser source.

Reflective optics are designed to reflect the laser beam, usually for beam positioning purposes. At the wavelengths produced by CO2 lasers, common substrate materials include silicon (Si), copper (Cu), aluminum (Al) and molybdenum (Mo). While Si must be coated to reflect CO2 wavelengths, uncoated Cu and Mo reflect over 95% of laser energy at CO2 wavelengths. Cu is typically used for applications where high power is involved. Its high thermal conductivity removes heat from the reflecting surface quickly, which helps protect it from thermal damage and distortion. Mo has an extremely tough surface and is typically used in environments where surface contamination is a problem. When using uncoated mirrors, thermal management of the mirrors becomes very important. Because uncoated mirrors absorb more laser energy than coated mirrors, they can heat up quickly if not effectively thermally managed.

Reflectivity values in excess of 99% are commonly achieved for all of the above substrates when coated appropriately. When specifying a reflective coating, the angle of incidence

(AOI) or a range of AOI must be specified, as reflective coatings are optimized for maximum reflectivity at certain AOI. If your optical delivery system includes a tracer beam (commonly red, at a 670 nm or 633 nm wavelength), dual-reflective coatings can be specified, as optics coated only for CO2 wavelengths will typically reflect approximately 50% of the tracer beam. With dual coatings, typically 80% of the tracer beam will be reflected with negligible loss of reflectivity at CO2 wavelengths.

At CO2 wavelengths, the most commonly used material for transmissive optics like windows is Zinc Selenide (ZnSe), due primarily to its low bulk-absorption at those wavelengths. Uncoated, ZnSe will reflect on the order of 14.5% (per surface) of incident power at CO2 wavelengths. Antireflective (AR) coatings typically result in a reflectivity of less than 1%. Dual AR coatings are also available for a 633nm (red) tracer beam.

Focusing lenses are used to focus the laser beam to a spot much smaller than the diameter of the beam. Plano-convex lenses are the most commonly used as these provide an economical solution and good performance.

Meniscus lenses can achieve a smaller focus spot as these correct for spherical aberrations present in plano-convex lenses, but these lenses are much more expensive.

Aspheric lenses provide yet a smaller focal spot but represent a cost well above that of meniscus lenses.

For galvanometer scanner applications, specialized "F-Theta" lenses are available that will transform angled output from a scan head into a flat focus field. To achieve a useful focusing spot size, a beam expander is typically placed between the laser and the galvanometer mirrors.

Beam expanders, also known as collimators, expand the laser beam and reduce its divergence. They are used to achieve consistent beam quality when a laser beam must travel over large distances, such as between ends of a large work surface.

Universal Laser Systems' lasers emit laser energy that is polarized linearly, perpendicular to the base plate. Because the effect a mirror or lens has on a laser beam will vary based on its orientation relative to the polarization of the beam, care should be used when selecting and placing optics. Refer to the technical reference guide for more information.

Depending on the power of your laser source, optics may need to be cooled to ensure their performance. Generally speaking, appropriately chosen optics can be air-cooled at laser power levels up to 200 watts.

The diameter of the beam at the point of contact with the material will create a material / laser radiation interaction area. For a diffraction-limited beam like the one produced by ULR lasers, the spot size is a product of focal length, beam diameter at the lens, the wavelength of laser energy used and other factors. Consider your desired spot size and use the formula below when selecting optics.

One fast and effective means to deliver your laser beam for marking purposes is a galvanometer-based delivery system, often known as a galvo system. These systems use two mirrors which rotate independently to position the laser beam on the work surface. One mirror controls the x-axis, and one controls the y-axis.

Galvanometer-based systems can perform marking operations at very high speeds because it is faster to rotate the lightweight mirrors than to move a lens assembly along a plane. These systems typically use an F-Theta lens. 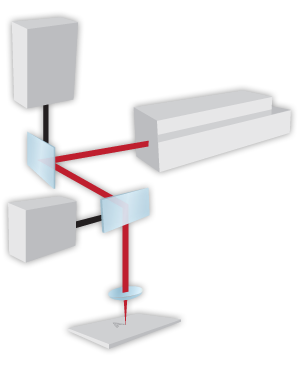